My parents cultivated a strong loving bond with my brother and I around the kitchen island. Our home growing up had an open plan kitchen, breakfast nook and family living room-and even the most important guests that came to visit would still be invited to sit in the family room, where we felt the most comfortable and where my mom could seamlessly prepare an incredible multi-course meal whilst entertaining.

My fondest childhood memories always included food, something prepared by the hands of my parents, and still today they tend to cook together. It’s what brings us together…

On mine and my brother’s first full day in Marrakech, we were invited by La Maison Arabe to a private cooking class that truly was unforgettable. Since I lived in the Middle East, I attempted to cook Moroccan ravines, but this 1-day class provided a thorough (thoughtfully done with brevity) course on the derivatives of Moroccan cuisine. What made it truly special from any other cuisine in the world. We made a true Moroccan feast at La Maison Arabe!

At La Maison Arabe, we learnt about Moroccan cuisine is a combination of Berber, Arab, Jewish (think preserved lemon) and Moorish (the Islamic empire from Spain) cuisines. The spice trade to colonialism to the tribes have all influenced the gastronomy of such a rich country.

Bread being the fork and knife of the cuisine, you can see where colonialist elements seeped into the Moroccan traditions.

You will find black and white pepper used brought from India, dried and ground ginger that is slightly sweet and subtly spicy, turmeric for color, dried cumin for salads and omelettes and lamb, sweet paprika, harissa chili for a touch more of spice, cinnamon to caramelize dried fruits and onions, ras el hanout is the garam masala of the country with each family and region with its own variations, saffron for a royal layer, orange blossom in the desserts as well as rosewater and argan oil.

The moment we started cooking in the tagine, a conical clay pot from North Africa that traditionally was cooked inside a baker’s oven is conical clay pot that is filled with meat, dried fruits and spices to create an entree. The aromas of each ingredient flirted with the next ingredient that was added into the tagine. The pungent olive oil, the onion then the garlic. This is the moment where I wish my photos had scratch-and-sniff capabilities. A true authentic cooking experience with La Maison Arabe!

Moroccan cuisine is known for its assortment of salads, not just the ravines. For the winter months you will find salads that are warm and more hearty. In the warmer months, more pickling is done. We made a side salad, a chicken tagine and the typical milk pastilla 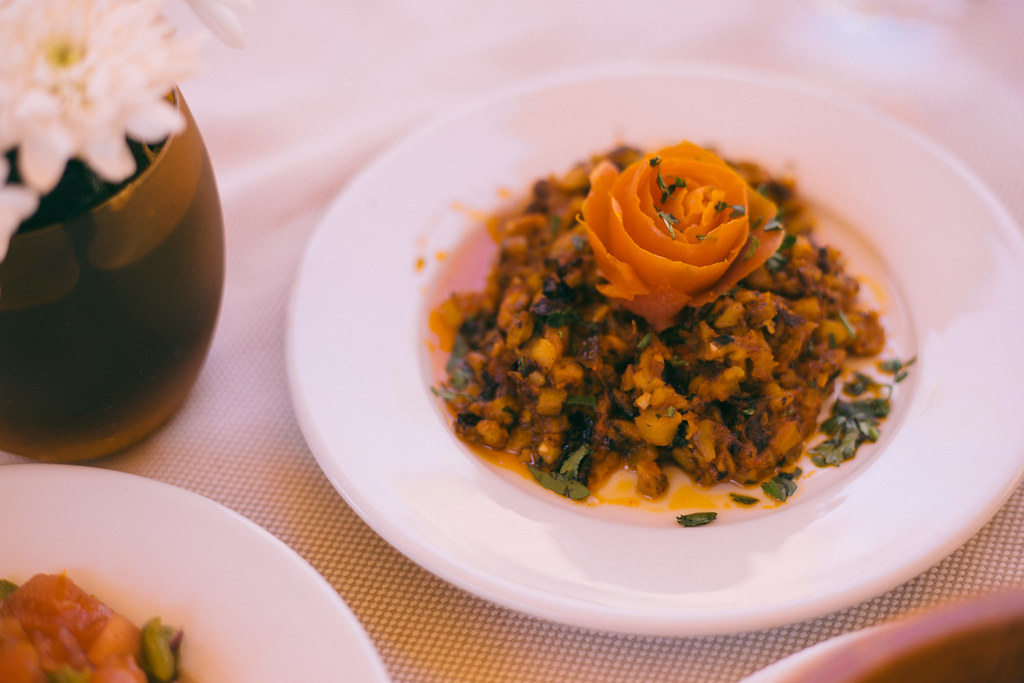 Mix the lemon juice into the aubergine mixture and simmer uncovered for 5 minutes. 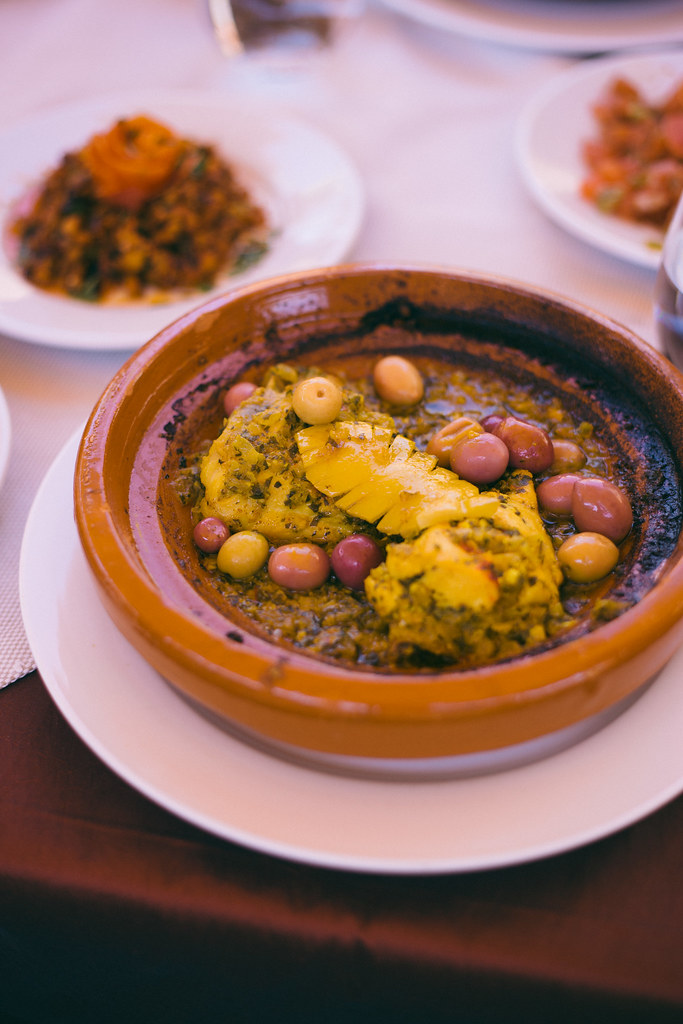 On low heat, sear the chicken pieces for 15 minutes. The tagine lid should be on, but a bit ajar to keep the moisture in. Turn each piece of chicken and add a bit of water if necessary. After 15 minutes, add 1 cup of cold water. Increase the heat to medium, cover the tagine and bring the cooking juices to a boil. Cook covered for 30 minutes or until the chicken is done. Once cooked through, season the tagine with the lemon peel and olives. 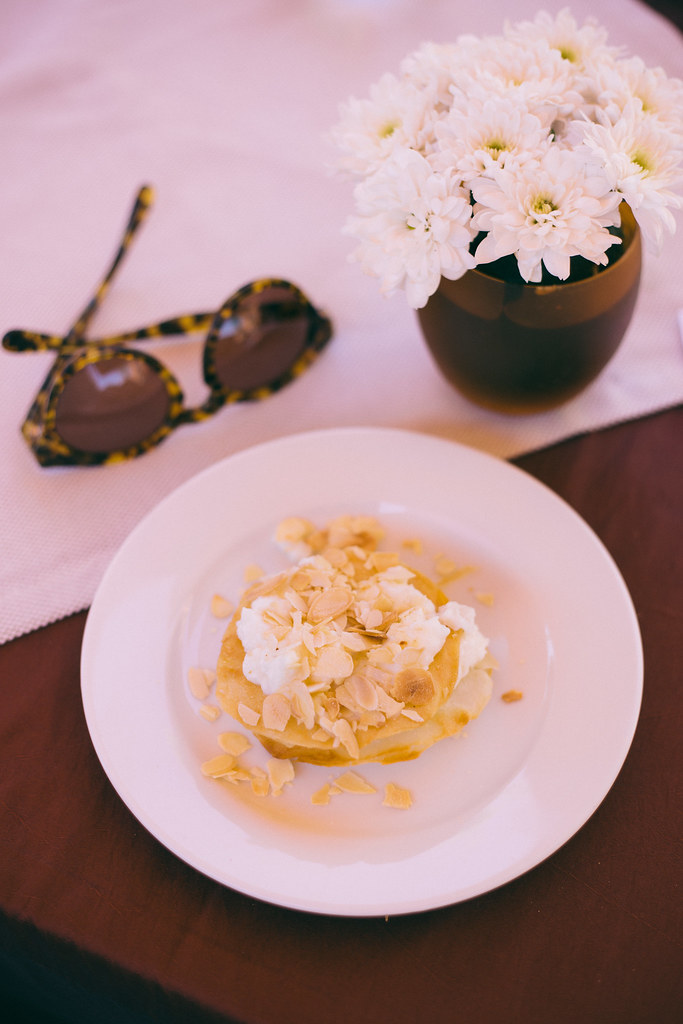 Place oil in a frying pan and heat in on medium heat. There should be enough oil to cover the almon that you are going to fry. Fry the almonds until golden brown. Transfer to a plate covered with paper towerl to aborb excess oil.

For the cream. In a saucepan, add the milk, sugar, cornstarch, orange peel and orange blossom water. Cook all the ingredients on medium heat until the mixture reaches to a boil. Then continue cooking the milk mixture for an extra 5 minutes. Stir constantly while cooking the milk cream to get a smooth texture.

Put it together. Cut the phyllo dough sheets into circles, press 2 sheets together and fry in hot oil until golden brown. Continue frying the rest of the sheets. Layer the fried sheets with the cream (peel removed) and top with the almonds, cinnamon and powdered sugar.

This experience was courtesy of La Maison Arabe. All thoughts and opinions are my own. One thing I truly loved was the historical walk through the ingredients and it’s something that cannot be missed! La Maison Arabe also has a few other expeirences and places to stay too!

Staycation Ideas: 5 Things to do in Richmond with Young's Hotels